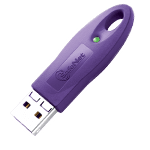 What is Sentinel SuperPro / UltraPro Dongle?

Sentinel is the first USB Protection lock developed by SuperPro Rainbow after merging with Safenet. This key can be used to define some of the modules in itself, the Define Time Limit and the shell method called Shell without Source code, thanks to the SDK, two types available as LPT and USB models.

This dongle with a stylish appearance was first produced in Purple. Later on, its design was changed by using a transparent plug with LED on the back side.

Sentinel Dongle currently has thousands of users, is a brand preferred by software companies operating in the field of Engineering Engineering. It is among the references that SDK, which has an easy interface, provides great convenience to users.

UltraPro is more capable than SuperPro. It appears to provide extra security by using the AES encryption algorithm.